A preview of weather and strategy by Mark Chisnell

The Route du Rhum – Destination Guadeloupe  is one of the classic ocean races, often attracting many or all of the top names in solo offshore racing. This fortieth anniversary year is no different with well over a hundred boats entered in six classes.

The 2018 edition will start on Sunday 4th November at 13:00UTC (2pm local time) from the beautiful town of St Malo on the north coast of Brittany. It will run 3542 nautical miles south-west across the North Atlantic to Pointe-à-Pitre on the south coast of the equally stunning Caribbean island of Guadeloupe.

In between the start and finish the weather will decide if things are good, bad or ugly for the skippers. The key to understanding the strategic challenges of this race course are the climate zones that they will have to negotiate.

The course chart summarizes the major features of the race, including some of the climate zones. So what’s a climate zone? The earth’s oceanic climate features distinct bands, lying horizontally and looping the globe, running out from the Equator to the Poles in a mirror image. In the Route du Rhum – Destination Guadeloupe they will cross through three of these zones as they head south-west.

The transitions between the zones often define the tactical and strategic elements of the race – the trick is finding the right entry and exit points for each transition, a moment when conditions can radically change, and gains and losses can be spectacular.

At this time of year, the start in St Malo is usually in the Westerly Storm Track. This is a region between about 40 and 60 degrees of latitude (it varies seasonally and with longitude) of storms and low-pressure systems that swirl west-to-east around the globe, circulating the Arctic in the northern hemisphere.

South of the Westerly Storm Track we have the Subtropical High-Pressure Zone. In the North Atlantic it is called the Azores High – named after the island chain – and it normally sits around 30-38 degrees. It’s a huge area of stable, semi-static high pressure that can block the route south-west. The big decision is usually whether to go north or south of the centre, but for some of the fleet this year it will produce a different problem.

Once they are through or around the Azores High, the fleet will enter the Trade Winds. These are moderate to strong winds that blow consistently towards the equator from the north-east in the northern hemisphere. Guadeloupe lies in the trade winds, so the boats will ride all the way to the finish in this climate zone – and that should mean fast, fun sailing in glorious conditions. 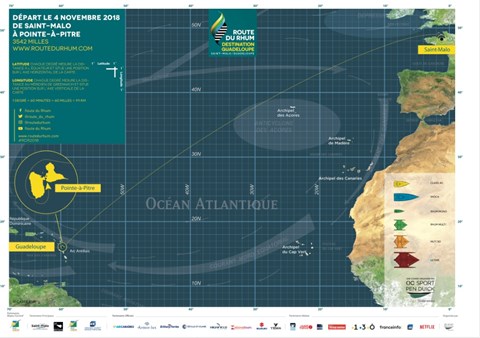 So much for the big picture – let’s get down to the nitty-gritty. The weather forecast for Sunday’s start shows a busy storm track in the North Atlantic with three active low-pressure systems. Readers in Northern Europe are about to feel the impact of the first, labelled L3 which will be passing over us on Saturday, before exiting stage right to have no impact on the race.

Another huge low, labelled L1 is already departing the eastern seaboard of the United States and starting to head east across the Atlantic. It’s this low that will control the medium-term strategy of the fleet – but I will come to that in a moment.

On Sunday, everyone is going to be mostly worried about the third and much smaller low pressure that I’ve called L2. It will dominate the short-term strategy. We can see it forming just on the western boundary of the Bay of Biscay on Sunday morning, and it could bring some light winds for the start on Sunday (St Malo is the purple triangle). 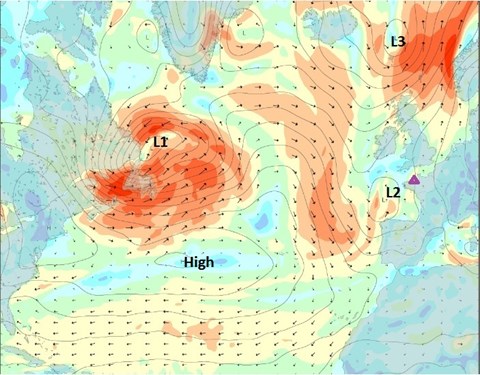 If there are light winds for the start they will be short lived, as the low pressure is forecast to deepen initially as we can see from this chart from midnight UTC on Sunday. It’s worth saying that the precise movements and timing of this low could easily change the details. For instance, the centre of that low doesn’t have to move much to change the wind direction at the start from a southerly to a northerly.

The big picture plan will be the same though, get the hammer down to get around Ushant as fast as possible – obviously this will be much easier in the bigger faster boats and they will have an easier time of this start than the small boats. And the goal once around Ushant (purple triangle) is to hightail it west and then south-west across the mouth of the Bay of Biscay.

At the moment it looks like the race will start on a reach in a southerly, before the wind will back around into the east and north-east. In this case, the first big decision will be when to gybe in this progressive wind shift to set up for the northerly to come.

Once the fleet are in the northerly breeze the likely plan will be to head south-west at an angle a little faster than their VMG angle (Velocity Made Good) – we can see why in the next picture. 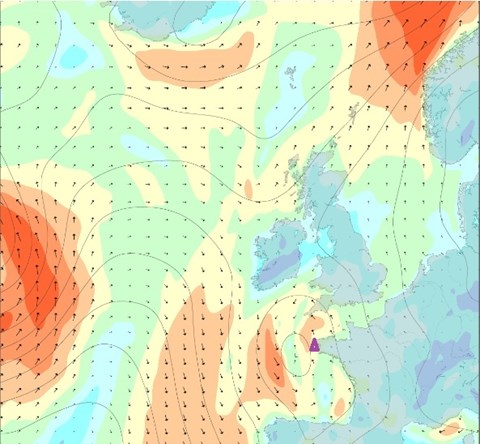 In this chart from Monday 5th November at 15:00UTC we can see why the strategy will be to get south-west. The little low is going to fill, and a bubble of high pressure is going to form over Brittany and the UK. Anyone that gets caught by it will lose some miles. The place to be is in that ridge of breeze marked by the black line. Again, this will be a lot easier for the quick boats…

The pain won’t last for long though, or rather it will, but it will change to pain of a very different sort. The second big low (still labelled L1) will sweep in and there will be plenty of breeze. 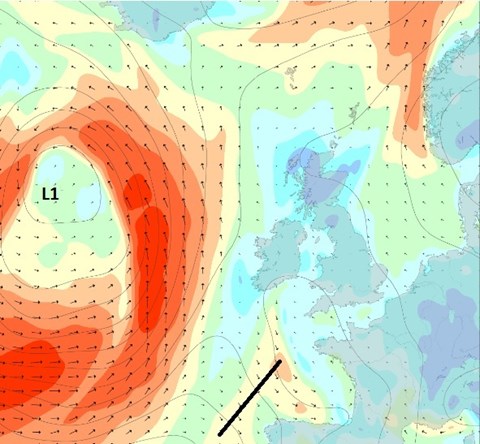 It’s still a big boat race in this 15:00UTC chart from Tuesday 6th November. Anyone that has had any kind of a problem and has not cleared Ushant at Point A is going to get a kicking trying to get around in the teeth of a strong southerly.

It doesn’t get a lot better for anyone that hasn’t cleared the Bay of Biscay. It’s about 500nm from the start to Cape Finisterre (roughly Point B) – and this is the weather forecast for two days into the race – so most of the fleet have a shot at getting past this point. There are some that won’t make it though, and they are going to have a rough time going upwind across one of the most notorious patches of water on the planet.

Ironically, it’s the battle-hardened superstars of the Ultimes, IMOCA and Multi 50s that should get far enough down the track to get into the westerly breeze beyond Point B. The Ultimes will make it to the north-westerly and even the northerly breeze on the western side of the low pressure at Point C and beyond. They will be in for a wet but infinitely faster ride. 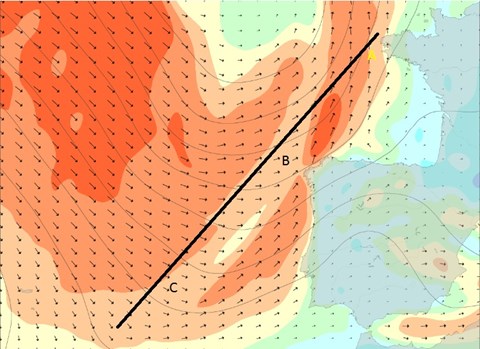 So, through to the early part of next week it looks relatively straight-forward with most of the gains for the majority of the fleets being made by going down that south-westerly track.

It’s this next chart at 15:00UTC on Wednesday 7th November that’s really going to put the cat among the pigeons. The big low pressure is not – at the moment – forecast to sweep across the fleet on its way to Northern Europe. It’s going to stall in the middle of the North Atlantic. The consequence is that the sub-tropical high will – for most of next week – form a pretty effective block (the red line), running east to west more or less all the way across the Atlantic.

This will provide respite for the smaller and slower boats who will find the winds easing and backing around to give them some nice sailing south. It’s going to be the make or break strategic and tactical decision for the faster boats though – they will reach the high and have to find a way across it before it breaks down.

It’s a very dynamic situation – in this forecast it looks like the escape route is to the east, down the coast of North Africa. That’s not always the case though; through Tuesday there should be more wind further offshore. The skippers will need to watch how this situation develops ahead of them as they go south.

I should also add a word about the Canary Islands and the Cape Verde Islands on this section, both of which can lie in the way as they head south-west – these are both volcanic, high pieces of land, and they can impact the strength and direction of the wind for hundreds of miles. And that means potential for further gains and losses. 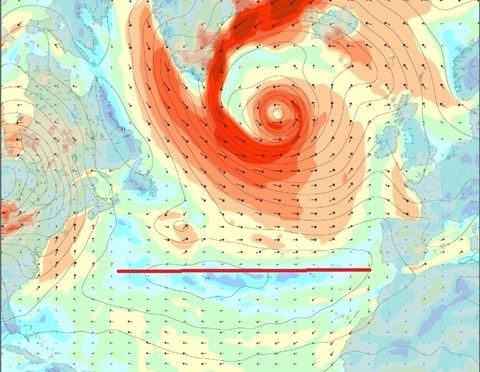 By Thursday 8th November the blocking high should have started to break down as a secondary low spins off the first and brings some rough weather to the smaller boats once again – as we can see in this image from 15:00UTC on the 8th.

By this point I’d expect all the Ultimes to be into the trade winds, working their way downwind to the finish at Guadeloupe. Their anticipated arrival is next weekend, so we’ll really push things with the forecast and look at one more… 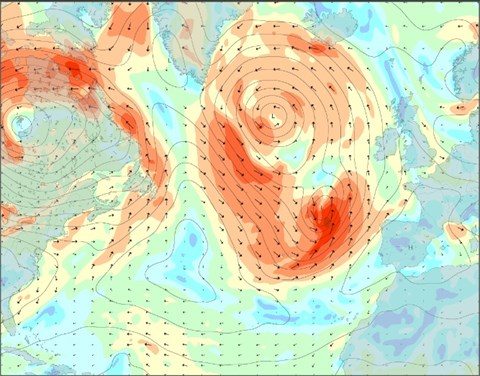 Home straight – for some…

This forecast for 15:00UTC next Saturday 10th November is eight days ahead, so this has gone from speculative to crystal ball gazing. The chart does have a much more conventional look about it though – the climate zones are all back where they should be – and this general situation is forecast through the early part of the following week. In which case we will see everyone threading their way down the coast of North Africa to the eastern side of the high and into the trade winds.

One note of caution is that at this point, high pressure is dominating the Caribbean and it looks like it could be quite light on the final stretch for the Ultimes. The finish is also a tricky one because the course goes around the islands of Guadeloupe anti-clockwise before heading north towards Pointe-à-Pitre and the finish at the entrance to the Canal des Saintes.

This puts the fleet in the lee of the island of Basse-Terre, which rises to 1,467m and includes the volcano of La Soufrière. So it can produce quite a wind shadow and if the boats are close together there’s a final chance to make a pass.

Only time will tell… we can say that it looks like it’s going to be a cracking race – with the whole fleet tested by both light winds and strong with some great opportunities and challenges in the weather forecast. I’ll be back to look at how it played out for both the Ultimes and the IMOCA fleets after they finish.